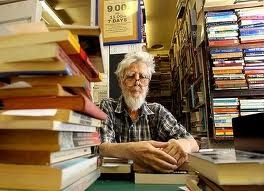 News came today of the untimely demise of one of the true legends of Sydney bibliophilia and out-and-out ratbaggery, Bob Gould.

According to the story in one of Bob’s most detested rags, The Sydney Morning Herald (Broadsheet of the Year!), Bob was doing his usual Sunday morning grumble sorting through books at his legendary fire-trap at the top end of King street, Newtown, when he somehow fell and hit his head. He slipped out of our reach before the ambulance could arrive from a couple of blocks away. He was 74.

I remember Bob as a gruff but affable enough chap who would answer any enquiry with an impatient wave of the hand in the general direction of the hectares of books all around him. Not as pretty, perhaps, as Bernard Black, but hatched in the same jar of ether, Bob was a committed left-wing activist to the end, railing against the direction the Australian Labor Party had taken (by which I assume he meant NONE), and just about anything to do with John Howard, including his tilt at the vice-presidency of the International Cricket Council.

Bob’s bookstore, Gould’s Books (the only surviving child of 12), was as idiosyncratic and unyielding as its proprietor, only surrendering its treasures to the truly persistent. But both loom large in my Newtown (read elastic adolescent) psyche, and although a legend passes I know Sydney well enough to sit here perched in my icy mountain aerie shivering but secure in the knowledge that some equally frustrating and inspiring individual will pick up the mantle, if not quite the business model itself.

Rest easy, Bob, wherever you find yourself.

Comment by Adrian Wiggins on May 31, 2011 at 16:47
Bob's passing is a real loss to the community of Newtown. I've got quite a few rare poetry books from his shelves over the years.